Stay up to date on new information and insights. 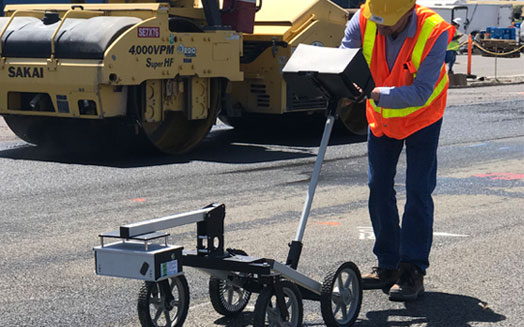 With the success of the IDEAL CT testing standard, which is rapidly becoming the cracking test of choice for Balanced Mix Design, Dr. Fujie Zhou of Texas A&M University set about developing a quick test for evaluating rutting. Rutting in most HMA pavements is due to shear deformation of the HMA layer. Back in the ‘90s, the Superpave Shear Tester (SST) was developed as part of SHRP research to be one of the HMA mixture performance tests for Superpave mix design. The SST applies a repeated 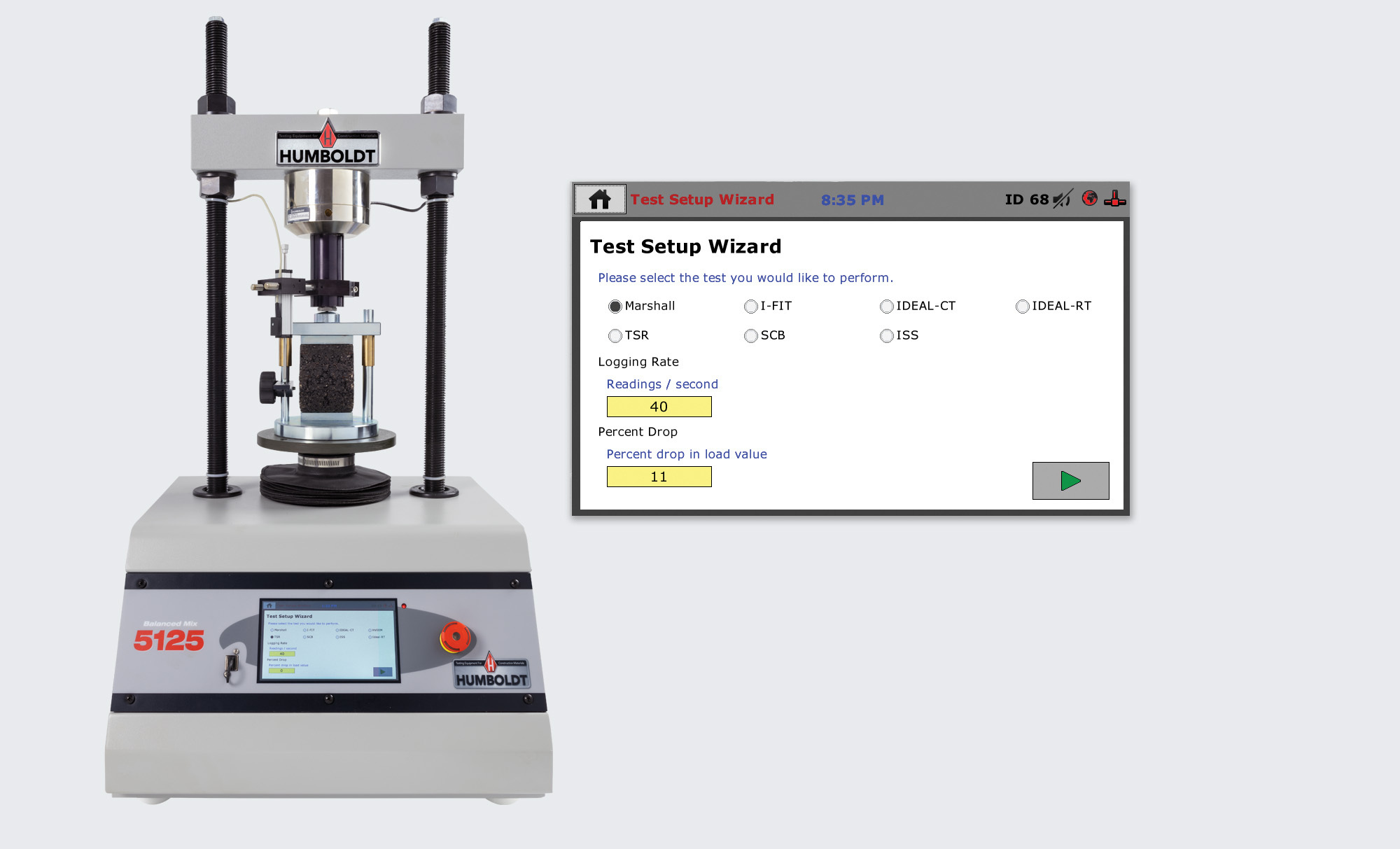 In 2015 a FHWA task force defined balance mix design (BMD) as an “asphalt mix design using performance tests on appropriately conditioned specimens that address multiple modes of distress taking into consideration mix aging, traffic, climate and location within the pavement structure”. Essentially, balanced mix design involves designing a mix that is specific to the intended application, through the incorporation of multiple mechanical tests, which examine a particular form of distress.

Superpave mix design is currently used in all but one U.S. state. The original intention of Superpave had been to test trial mix designs with performance tests in a similar way to the Marshall and Hveem methods. Devices such as the Simple Shear Tester (SST) and Simple Performance Tester (SPT, now AMPT) were attempts at the performance tests, but the expense of the equipment and complexity of the tests made them unpopular in many labs.

As a result, the Superpave mix design system was implemented only with volumetric elements. Many factors have changed since the development of Superpave. These include:

Progressive DOTs have been looking for simple performance tests to supplement volumetrics. The first edition used was the APA or Hamburg test. Added to many state specifications, these tests have been successful in reducing rutting in mixtures for a number of years. Wheel tracking tests in various forms have been used in many parts of the world since the '40s, if not before. It is believed that if mixes perform well in laboratory rutting tests, mixes are unlikely to rut in the field.

Cracking Test
More recently, some professors have started to look at tests and ideas used in metallurgy and fracture mechanics. They have applied this methodology to asphalt mixture testing, often using simple, existing lab equipment. These tests are referred to as a cracking test and include the Louisiana SCB, the Illinois Flexibility Index, the Texas Overlay test and the IDEAL CT test. The cracking tests can be divided into two groups: Dynamic, which includes Bending Fatigue and Texas Overlay, and Monotonic, which includes Bending Fatigue, Louisiana SCB, I-FIT, IDEAL CT, and DCT. 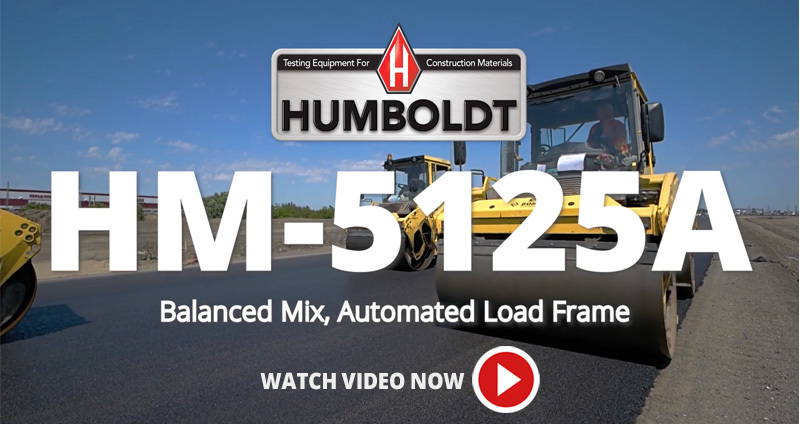 Uses the Superpave volumetric mix design approach along with performance tests that must be passed at the end. This approach is currently being used in Illinois, Louisiana, New Jersey, Texas and Wisconsin.

Begins with the Superpave mix design approach but additional adjustments to the mix proportions are executed to meet the performance test requirements. The final design, however, may not need to meet all the conventional Superpave criteria. California currently uses this approach.

Skips the volumetric mix design and starts by utilizing performance tests in order to evaluate the mix. Minimum requirements may be set for asphalt binder aggregate properties, but volumetric criteria are not mandatory. This approach is not currently in use but is still seen as an option.

The Hamburg test, or immersion wheel tracking, has become an extremely popular test method over the last few years. It has been used in Texas for many years however, the Texas standard is slightly different from AASHTO T324 and EN 12697-22 in terms of the analysis. Make sure the machine complies with the test you intend to use.

In recent years many mixture design methods have produced materials that are stiffer, leaner and more resistant to rutting, however, such materials are often more susceptible to fatigue and reflection cracking. The TX Pro Overlay Tester was designed to simulate the expansion and contraction movements that occur in the vicinity of joints or cracks and which result in reflection cracking in overlays.

The IDEAL Cracking Test was developed by Fujie Zhou at Texas A&M. It is a Lottman test that uses fracture mechanic analysis. Interestingly, as with the Overlay test, the specimen has no notch. In various studies, it has been found to correlate well with SCB tests, despite the lack of a notch.

Although not a BMD test, it is worth mentioning this test because debonding is a significant cause of failures within Texas. The Shear Bond Strenght Test is seen as being a very important test and can be performed on the Humboldt BMD frame.

Essentially, balanced mix design involves designing a mix that is specific to the intended application, through the incorporation of multiple mechanical tests, which examine a particular form of distress.

All these tests have existed in some form for many years. The change has come in the way in which the data is analyzed. In all but the bending fatigue test, fracture mechanic principles have been utilized in the data analysis. Changes have also been made to the analysis of bending fatigue data, and as with the Texas Overlay, a move away from cycles to load/stiffness reduction as an indicator of failure has been made.

Texas is often considered to be the state in which the Balanced Mix Design concept originated, although in Texas they sometimes refer to it as Optimized rather than Balanced. The Hamburg Wheel Tracking Test and Texas Overlay Test will soon be supplemented with IDEAL CT. Volumetric criteria are still used to select asphalt binder content, the Hamburg is used to evaluate a mix’s resistance to rutting and the Overlay is used to evaluate cracking resistance.

Louisiana and Illinois use a similar BMD approach with a semi-circular bend (SCB) test and a parameter to assess the cracking resistance of mix designs. Other states are following their lead in the Volumetric Design with Performance Verification BMD approach.